Most people use their social media page as if only their friends can see it and no repercussions can come from the offensive/racist/sexist things they say on it. The truth is, many people have lost their jobs or were never hired to begin with simply because of the things they chose to share on social media.

These are the dos and don’ts of posting on social media.

1. Show Your Personality and Interests

It’s OK to have fun with social media and be true to yourself. Employers could see you’re a good fit with their company culture. Culture is huge here at BBR, and I’ve personally turned down qualified candidates that were not a good fit culturally.

Professionalism doesn’t have to mean straight-laced and boring. Be yourself. Be fun. Just don’t be an idiot.

Being a creative agency, we love seeing team members and potential hires displaying their creativity on social media. More importantly, communication is a crucial skill in everyday life. There’s nothing worse than visiting someone’s Facebook page only to see it filled with passive-aggressive “vaguebooking.”

4. Post with the Assumption that Anyone and Everyone will See It

Even if your profile is set to private. There are a host of other ways someone not in your friend list can see your posts.

This entire section can be summed up with, “Don’t be an asshole.” I could stop there, but this is when it gets really fun. If you’re not sure if you should post something or not, it’s probably safe to not post it. When in doubt, just friend your mom and let her see everything.

DISCLAIMER: I am not saying all of the below consequences are fair or just. Just because it’s wrong doesn’t mean it’s illegal and can’t happen to you.

The followers who saw the stream were begging her to pull over and stop. When she didn’t listen, someone called the cops, and she was promptly arrested. This also holds true for underage kids who post images of themselves drinking. Adam Bauer, a 19 year old college student, accepted a Facebook friend request from an attractive girl that he didn’t know and found himself hit with underage drinking charges from Facebook photos of himself drinking.

He was one of eight underaged kids who friended this same person. They were all catfished!

This is why red Solo cups were created, people!

A college student got expelled for calling his ex-girlfriend a “psycho bitch” on Twitter. He didn’t even use her name in the post and did it off campus during the summer. His account was even private. The decision is being challenged, but is it really worth the risk?

Just sulk in silence while listening to Morrissey records like those Gen X-ers used to do.

This includes current, past or future jobs, bosses or teachers. There was a woman who decided it would be a good idea to post about how much she hates being around groups of kids just days before starting her new job at a daycare.

The post started to spread around the town, and she was promptly fired when irate parents brought it to the attention of her employers.

There are so many hilarious examples of this exact thing happening. One of my favorites is when a girl thought it would be the greatest idea to tweet, “Ew I start this f*** ass job tomorrow.”

This is what happened: 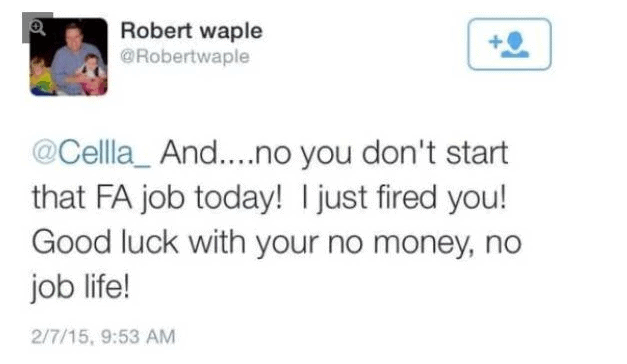 She didn’t seem too broken up about it…

Another college student was expelled after going on a rant about the “hoodrat criminals in Baltimore.” When someone commented in opposition, she kicked the bigotry up a notch by replying, “Chill the f*** out you Islamic s***head.”

I’m usually thankful when people post racist or sexist things on social media. It let’s me know who I should block and avoid interacting with, but you should probably keep these things under wraps if you want to finish your education or keep your job.

Just remember, the dumb things you post online are there forever. Even if you realize your mistake and delete the offending comment, there’s a good chance someone has already taken a screenshot.

93% of hiring managers review candidates social media pages, and your social media presence plays a role in your evaluation. Even if you’ve managed to keep your crazy bottled up until you’ve found a job, you don’t have the green light to post whatever you want once you’ve got it.

Like with all potentially addictive things, use the Internet and social media responsibly.